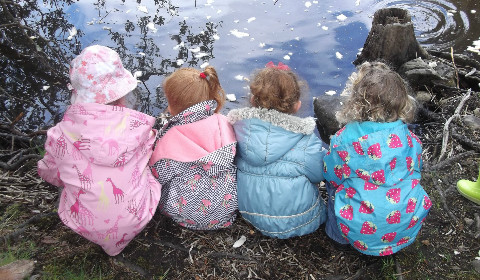 Grantown Playgroup was established in 1972, by a group of mothers and operated, initially, from the Episcopal Church Hall. Shortly afterwards, the playgroup moved to the upper floor of the Community Centre, a large sports hall, used by many other groups, resulting in equipment having to be stowed away at the end of every session and then hauled out again the next day. As the years progressed, parents aspired towards a higher quality experience for their pre-school children, run by qualified staff, rather than just parents.

Unable to find suitable premises locally, a group of very determined parents undertook the challenge of raising enough money to build our very own custom-built premises, here in Black Park. The land, which is community owned, was gifted to the group, on condition that the pre-school would be run as a community, as opposed to private, venture and the (then) Highlands and Islands Development Board committed to providing 40% of the costs. The Strathspey Pre School Trust was established and fundraising began in earnest to raise the estimated £30,000 required.

Work eventually began on the building in March 1991 and it opened to children in August 1991. The final cost of the building was £47,156!! What an amazingly supportive community to help a group of mums realise their dreams.

Of course nothing stands still for long and with the advent of government-funded pre-school education for four year olds, initially and then three year olds, too, Playgroup made the decision to apply to provide Early Learning and Childcare. In 2000, Grantown Playgroup was registered as a Partner Centre with Highland Council and now can provide Early Learning and Childcare for 2 to 5 year olds.

We are inspected biennually by the Care Inspectorate and periodically by Education Scotland. All our qualified staff have been through the Enhanced Disclosure (PVG)  process and are registered with the Scottish Social Services Council. All staff are trained in First Aid, Food Hygiene and child protection. We are members of Care and Learning Alliance (CALA).